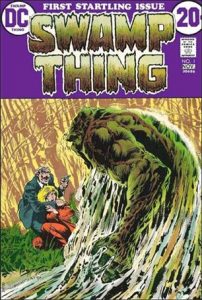 The “Swamp Thing” is coming. DC Entertainment has announced plans to adapt the popular comic series — about a swamp-dwelling creature that is part man and part plant, and which roams the marshes of south Louisiana — as a potential live-action TV series, according to The Hollywood Reporter and other industry publications.

The project, which would be set in and around Houma, is still early in development, with Mark Verheiden (“Daredevil”) and Gary Dauberman (“It”) signed to co-write an initial script. If that script meets with DC’s approval, the show would go into production for DC Entertainment’s yet-to-be-launched on-demand service, dubbed DC Universe.

Verheiden and Dauberman would also executive-produce the series, alongside filmmaker James Wan (“Saw,” “The Conjuring”), in association with Warner Bros. Television.