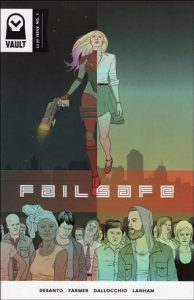 Netflix is activating its Failsafe.

Michael B. Jordan is teaming up with Black Panther co-writer Joe Robert Cole to produce Failsafe, an adaptation of the Vault Comics title of the same name.

According to a report by Deadline, Jordan is co-producing the adaptation with an eye to potentially star in it — not that he’s wanting for work in the wake of Black Panther’s massive success at the box office.

Created by F.J. Desanto, Federico Dallocchio, and Todd Farmer, Failsafe focuses on a bounty hunter named John Ravane, who hunts down nanotech-enhanced super soldiers of the Insurgence Program. Believing he has executed the last of the rogue insurgents, Ravane moves on to other causes.

But when sleeper agents are mysteriously activated ten years following his victory, the true purpose of the Insurgence Program is finally revealed, forcing Ravane is forced to contend with both the insurgents and forces from the government as he works to stop a brewing conflict from boiling over into war.

The comic series was launched in April 2017, largely sharing its premise with a previous DC Comics series called Insurgent from the same creative team. That series, which began publishing in 2013, was quickly cancelled by the publisher, only to re-emerge with a new name from Vault Comics four years later.