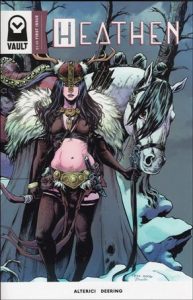 EXCLUSIVE: Constantin Film and Prime Universe have teamed to turn the Vault Comic title Heathen into a film with a kickass female Viking warrior protagonist. Script will be written by Kerry Williamson, whose credits include Alex Cross, Netflix’s What Happened to Monday and who’s adapting the fantasy series Sandman Slim for director Chad Stahelski and Studio 8. Constantin’s Robert Kulzer will produce with Adrian Askarieh, whose Prime Universe Films is in a two-year first-look deal with Constantin. F.J. DeSanto will also produce.

Written and drawn by Natasha Alterici, Heathen tells the story of a young viking warrior named Aydis. An outcast and sel-pfroclaimed “heathen,” Aydis is a woman born into a time of warfare, suffering and subjugation of women. She takes on a quest to end the oppressive reign of the god-king Odin, and break the shackles imposed on the women around her.

The first volume sold out quickly and went back for a second printing, and the second volume arrives in July. The book was recently selected by Young Adult Library Service Association to be included in its 2018 Great Graphic Novels For Teens list.

Constantin’s Martin Moszkowicz will be exec producer with Vault CEO and publisher Damian Wassel. Kulzer and Margo Klewans will oversee on behalf of Constantin.

Said Alterici: “The entire Heathen team and I are incredibly excited about adapting my little lesbian viking comic for film, especially with a kindred spirit like Kerry writing it. I’ve been a film fanatic for longer than I’ve been a comics fans, and that my working in one format would lead to another is nothing less than a dream come true.”