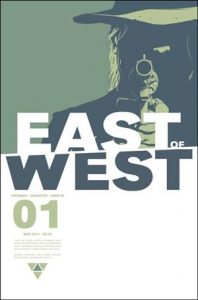 Transhuman and East of West have been optioned by Amazon as live-action television series, according to Deadline. Based on the comic book titles written by Jonathan Hickman and drawn by J.M. Ringuet and Nick Dragotta respectively, the two adaptations are produced by Robert Kirkman’s Skybound Entertainment as part of the company’s recent exclusive ‘first look’ deal with Amazon.

“Nick, J.M. and I couldn’t be more excited to be working with Skybound and Amazon,” said Hickman. “We feel very strongly about each project and couldn’t be more appreciative of how far both companies have gone to make us feel welcome. We look forward to doing the work and hopefully doing it well.”