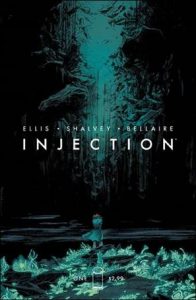 The comic was first published in 2015 and revolves around a group of highly specialized individuals who are brought together by the British government to hypothesize about the future of human culture. After discovering the results, the group decides to create an unusual artificial intelligence using a combination of technology and shamanistic magic, which makes its way into our world.

Ellis is a comic book writer, novelist, and screenwriter. He is best known as the co-creator of several original comic series including Transmetropolitan, Global Frequency, Red, and Injection. Ellis is the author of Crooked Little Vein, Gun Machine, and the novella Normal. Should Injection move to series, it would become the latest small-screen foray for Ellis following Netflix’s Castlevania.