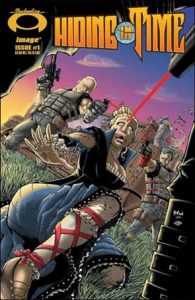 Hiding in Time may not immediately spring to mind when it comes to things from the archives of Image Comics that should be adapted in live-action form. However, MGM Television has enough interest, and it just optioned the rights to the seemingly forgotten comic book miniseries, with plans to adapt it for the small screen.

MGM is moving forward with the development of a Hiding in Time television series, according to Deadline. The studio has tapped screenwriter Richard Smith (In Her Name) to write the series, based on the three-issue miniseries written by Christopher E. Long, which featured artwork by Ryan Winn. Image published Hiding in Time in 2007 under the Shadowline label, which was started by company co-founder Jim Valentino.

Hiding in Time showcases a near-future setting in which the Witness Relocation Program utilize time travel to hide those under its charge. However, that all changes when the list of witnesses (and their chronological location,) is released, which essentially ushers in an open season on those formerly hidden by time. Consequently, a technician, named Nathan Crew, rises up to combat this catastrophe by travelling back in time to warn the targets and fix the anachronisms caused by their deaths. The endeavor to save one notable witness, Abraham Smith, sends Crew to 1770s Colonial America, where he battles future-sent assassins, and meets Benjamin Franklin.