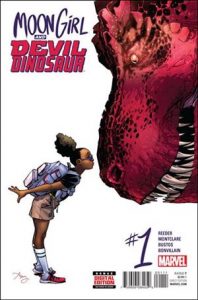 It looks like Disney Channel is getting in on some more Marvel fun. According to a brand-new report, the network is working on an animated series focused on Moon Girl and Devil Dinosaur with one all-star crew.

Deadline is reporting that Disney Channels Worldwide is developing the animated series. Executive producers Laurence Fishburne and Helen Sugland will oversee the project via Cinema Gypsy Productions and Marvel Animation.

The animated series will adapt Moon Girl’s popular comic book series. There is no official synopsis for the developing show, but it will tell the adventures of Lunella Lafayette. The African-American girl uses her genius IQ to become a 9-year-old superhero who teams up with a roaring red dino. The pair put their heads together to save the day time and again from various evil villains.

Right now, there is no word on which Disney outlet the series will air on. The series still needs to get a green light for either Disney Channel, Disney XD, or Disney Junior before it can head into its full episode order.

Marvel’s Moon Girl and Devil Dinosaur appears to be part of ABC Studios’ recent deal with Cinema Gypsy Productions. The partnership was sealed with Fishburne and Sugland after the pair’s comedy series black-ish earned rave reviews. The duo will no oversee new projects for ABC Studios as producers moving forward.