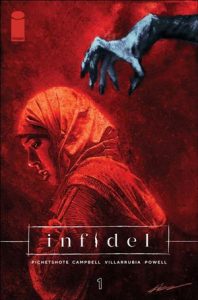 TriStar Pictures has picked up the rights to Infidel, a horror comic from former DC/Vertigo editor Pornsak Pichetshote and artist Aaron Campbell.

Michael Sugar, who won an Oscar for producing Spotlight and is an exec producer on Netflix’s 13 Reasons Why, will produce the adaptation with Ashley Zalta via the duo’s Sugar23 banner. Anonymous Content will also produce.

Described as a haunted-house story for the 21st century, the comic centers on an American Muslim woman and her multiracial neighbors, who find themselves living in a building haunted by strange creatures that seemingly feed on xenophobia.

The deal, said to be in the low six figures and picked in a competitive environment, comes after the first issue was released in March by publisher Image Comics.

The comic combines racial themes and the horror genre in a way that is similar to Get Out, Jordan Peele’s movie that became a runaway and Oscar-winning hit.

“Audiences are responding to fresh, timely stories that, like Infidel, can resonate through the current state of our culture,” said TriStar senior vp Nicole Brown, who will oversee the project with Nick Krishnamurthy, in a statement. “Infidel has those provocative elements to create a touchstone thriller.”

Said Sugar: “At Sugar23, we want to produce projects that are unexpected, wholly original and speak to the truth of contemporary society. Infidel is the epitome of one of those stories, equal parts mystery, social critique and genre thriller.”

“Every aspect of creating Infidel came from laying bare our very personal fears regarding the times we’re in,” Pichetshote and Campbell said in a joint statement. “The fact that it’s struck a chord at all, much less been subject to such competition to adapt it, is enormously flattering.”