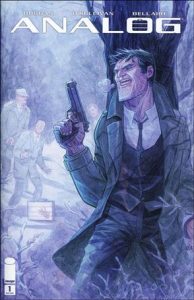 “Analog” takes place in the near future, after all internet security is destroyed in an event called The Great Doxxing. The series follows one of the men involved, Jack McGinnis, who in the wake of the cyber attack has become part of an organization that protects confidential files the old-fashioned way… with a briefcase and a gun.