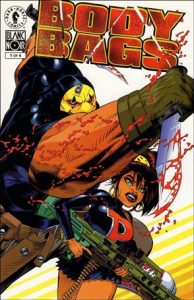 Dave Bautista has signed on to star in and produce a film adaptation of Jason Pearson’s Body Bags – under the new title of Dogtown, according to Deadline. Bautista will play Mack “Clownface” Delgado, a professional bounty hunter who discovers he has a teenage daughter – and she wants to join the family profession. The role of the daughter, Panda, has not yet been cast.

John Wick 2 screenwriter Kyle Ward is set to adapt the the original 1996 comic book series. The film is being produced by Hivemind and Bold Films.

“This is our first big graphic novel based action movie, which marks an exciting transition at the company,” said Bold Films’ Gary Michael Walters. “We are moving into larger budgets, something that started with Stronger. We want to make baby blockbusters, where you take wall to wall action, and then scalpel back some of that action and inject more plot, theme and character. The hope is to give a big entertainment experience with a lot of ideas and interesting characters.