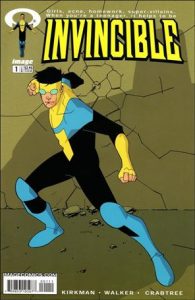 With his first project at Amazon Studios, Robert Kirkman is set to adapt his second most popular comic, Invincible.

According to The Hollywood Reporter, Amazon has given a straight-to-series order to an animated Invincible series, based on the Kirkman and Corey Walkers’s comic series of the same name. The project was previously announced as a feature film at Universal, but this report suggests that the new animated series has taken over as the sole Invincible adaptation in the works.

The series, though animated, is being described as an adult drama, much like the comic. Invincible follows a teenager named Mark Grayson, whose father is the most powerful superhero in the world. After turning 17, Mark starts to develop powers of his own, and become his father’s protege. The comic, which was (mostly) illustrated by Ryan Ottley, ran from 2003 to 2018.

Invincible has been ordered for an eight-episode first season, with Simon Racioppa (Teen Titans) set as the showrunner. Kirkman, Racioppa, David Albert, and Catherine Winder will serve as executive producers.

“Robert has an uncanny talent to predict the zeitgeist, and we are incredibly excited to see him break boundaries in an animated one-hour format,” said Sharon Yguado, head of scripted genre programming at Amazon Studios. “In a world saturated with superhero fare, we trust Robert to subvert expectations while encapsulating a story filled with heart and adrenaline. We love his ambitious plan for the show and believe it will look like nothing else on television.”

The series comes as Kirkman’s first with Amazon, after the studio inked a first-look production deal with his publishing banner, Skybound. While this will be his foray into the world of streaming services, it’s his third overall TV series, following The Walking Dead, Fear the Walking Dead, and Outcast.