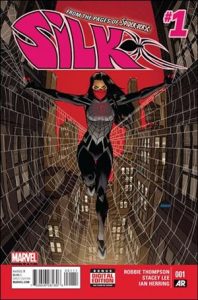 Sony and producer Amy Pascal are in early development on a movie adaptation of the Marvel comic Silk, about Korean-American superheroine Cindy Moon, which was created by Dan Slott and Humberto Ramos.

In the comics, Cindy is a student in Peter Parker’s class who also is bitten by a radioactive spider around the same time as Peter. She gains abilities similar to his, though she is able to shoot webs out of her fingertips, possesses an eidetic memory, and has advanced Spider-Sense (known as Silk Sense) far stronger than Peter’s. She also has less superhuman strength than him but is faster.

While this project will mark the first stand-alone feature for Cindy Moon, it wouldn’t be the first time she appears in the MCU. The character was seen in Pascal-produced Spider-Man: Homecoming (played by Tiffany Espensen) as a member of the decathlon team along with Tom Holland’s Peter Parker. In Avengers: Infinity War, Espensen reprises her role briefly when Cindy is shown on the bus with Peter when he plants a distraction in order to get into costume.

Details are being kept under wraps, and Sony is not commenting.

This film adds another wrinkle to the ongoing push for diversity and inclusion on screen, especially in big blockbusters. Pascal is known for championing strong female-led features. Most recently, the former Sony Motion Picture boss acquired a sci-fi pitch, Genius, from screenwriter Kat Wood. It’s set in modern day with a strong female lead and is described as a thriller about a scientist who accidentally brings back a prehistoric form of human species.

Pascal, under her Sony-based Pascal Pictures banner, has an upcoming slate that includes the Spider-Man spinoffs Venom and Silver & Black, The Girl in the Spider’s Web starring Claire Foy, and the live-action Barbie movie.