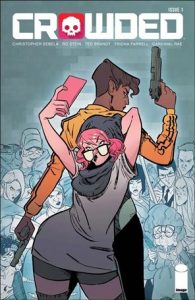 Rebel Wilson has optioned the rights to Crowded, an upcoming Image Comics book, with the goal of starring in and producing the movie adaptation.

Wilson will develop the project and produce it via her Camp Sugar production banner. Also producing is Oni Entertainment.

Crowded, written by Christopher Sebela and drawn by Ro Stein and Ted Brandt, is set in a near future where the world’s economy is all job sharing and apps and where a crowdfunding platform that funds assassinations named Reapr is all the rage. The story is set in motion when a woman named Charlie, leading a quiet normal life, finds her world upside down when she suddenly becomes a target on Reapr, with a multimillion-dollar bounty. Desperate, the woman hires the only person she is able to afford: Vita, the lowest-rated bodyguard on the Dfend app. The two have to work together to take down the aspirational assassins and find out who wants Charlie dead before the campaign’s 30-day period concludes, or their lives are over.