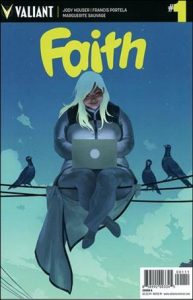 Sony Pictures has decided to move forward with plans to adapt Valiant Comics’ Faith for the big screen. The studio has enlisted American Gods writer Maria Melnik to pen the screenplay for the adaptation. Melnik is credited with writing eight episodes for Starz’s television adaptation of the Neil Gaiman novel, as well as additional writing work on the network’s Counterpart and Black Sails series.

Faith Herbert is a member of Valiant Comics’ Harbinger Renegades team, a group of superheroes who fight against the corrupt Harbinger Foundation and its sinister leader. Faith has the power to fly, as well as create forcefields that can shield allies and manipulate objects. She is notably one of the few active overweight superheroes in comics.

This is not the first time Sony Pictures and Valiant Comics have teamed up to bring the latter’s characters to the big screen. The two are also working on a film based on the Bloodshot comic book series. Bloodshot will star Vin Diesel as the titular hero, alongside Baby Driver’s Eiza Gonzalez and Outlander’s Toby Kebbell and Sam Heughan. A film centered around the Harbinger Renegades themselves is also said to be in the works.

Faith received her own series in 2016 from writer Jody Houser and artists Francis Portela and Marguerite Sauvage.