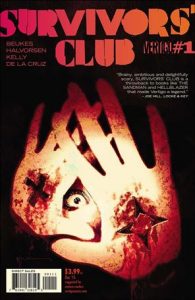 A television series based on the DC/Vertigo series Survivors’ Club is in development for the CW, according to Deadline. Sweet/Vicious writer Jared Frieder is reportedly spearheading the project under Warner Bros. Television, working from the original comic series by writers Lauren Beukes and Dale Halverson, along with artst Ryan Kelly.

“The haunted house, the demonic doll, the cursed video game, the monstrous neighbor, the vengeful ghost, the killer imaginary friend…in 1987 a wave of horrors struck six communities around the globe. Six traumatized kids survived those events, and grew up haunted by what happened to them,” reads Vertigo’s description of the comic book title. “Almost 30 years later, the six survivors are drawn together in Los Angeles to confront a terrifying childhood nightmare that has returned, bringing up their own traumas and dragging their dark secrets into the light. Somehow, they’re all connected. But when personal horrors collide, they’ll be forced to confront one another’s demons.”

This is the third Vertigo series the CW has optioned for development, following iZombie and Lucifer.