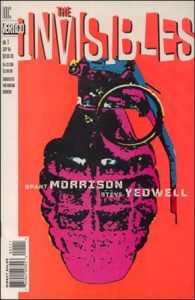 Grant Morrison is extending his relationship with Universal Cable Productions.

The comic book and TV writer and executive producer has signed an overall deal with the studio behind Syfy’s Happy and Brave New World.

Under the deal, Morrison will team with the cable-focused studio to develop and produce original content for linear and streaming networks.

Morrison’s first project under the pact will be to adapt his long-running comic series The Invisibles for UCP. A network is not yet attached to the drama, which is set in 2020 and follows an elite international cell of occult freedom fighters dedicated to the creation of a better world for everyone — by any means necessary.

UCP is currently in production on season two of Happy, which stars Chris Meloni and is based on Morrison and Darick Robertson’s graphic novel. Morrison is also teaming with Amblin TV, Brian Taylor and David Wiener to adapt Aldous Huxley’s iconic sci-fi novel Brave New World, which has been heating up at Syfy.

Morrison’s Batman title Arkham Asylum has sold more than 600,000 copies in the U.S. alone and ranks as the most successful original graphic novel to be published in America. He is repped by ICM Partners and Ginsburg Daniels.