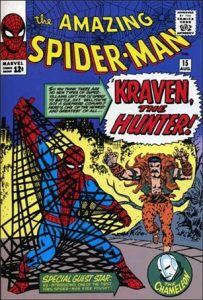 Richard Wenk, writer of Sony’s Kraven the Hunter movie, has revealed he’s currently working on the script – and that the film could even feature Spider-Man. It seems Sony intends to draw upon the famous Kraven’s Last Hunt comic book arc.

Venom was something of a gamble for Sony Pictures; could their Spider-Man spinoffs possibly work? Although the critics haven’t been kind, the film’s box office performance has been even better than anticipated. It shattered October’s box office record, grossing $80 million domestically and a staggering $205 million worldwide in its opening weekend. So it’s hardly a surprise that Sony is now pushing full steam ahead with further spinoffs.

Related: All The Spider-Villain Movies Coming After Venom

The Discussing Film podcast posted an interview with Wenk, who’s dropped what may well be something of a bombshell for Marvel fans. Wenk has revealed that he’s playing around with the concept of Kraven’s Last Hunt – and that he’s currently envisioning a story in which Kraven “comes face-to-face with Spider-Man.”

It’s an interesting world, a great character… it’s in the Spider-Man universe. I’m going to adhere very closely to the lore of Kraven the Hunter, and he’s going to come face-to-face with Spider-Man. I think that where we’re all circling is that this is Kraven’s Last Hunt, and whether this is the precursor to that movie, whether it will include it, we’re talking about those things. And even the idea that maybe Kraven could be like Kill Bill, basically a two-part movie. It’s all in the mix.