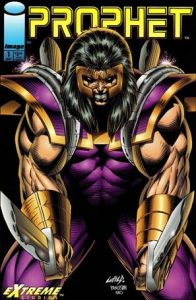 Prophet could be the next creation of Rob Liefeld to get a movie. With Liefeld’s Marvel Comics creation Deadpool having inspired the titular 2016 global box office smash, which globally grossed $783 million, along with this past May’s (currently) $727 million-grossing sequel, the idea of Hollywood delving further into his comic portfolio was an inevitability.

Studio 8 has made a deal for the Prophet movie rights that, according to Deadline, ranges in the “mid-six against seven figures.” The deal will see Liefeld’s character – a creation that he introduced back in 1992 in the second issue of inaugural Image Comics title Youngblood – adapted as a movie with franchise designs. The character was the center of a few comic spinoff series and was even part of a two-issue 1997 crossover event with Liefeld’s Marvel creation, Cable. The character would be rebooted in 2012 as part of Image’s brand-wide updating.

The classic arc of the character, Prophet, is bit of a twist on the Captain America dynamic, depicting a World War II-era homeless man, named John Prophet, who volunteers for a super-soldier experiment. However, rather than becoming a Nazi-punching red-white-and-blue boy scout, Prophet was turned into an enhanced warrior designed to be exploited by evil. However, his designer ultimately altered this evil designation and put Prophet safely into stasis. Consequently, upon his awakening in modern times, Prophet (much like Cap,) becomes a hero out of time, initially tangling with Liefeld-created super-team Youngblood, due to his post-stasis confusion.

The Prophet movie project will see Liefeld onboard as a producer, joined by Adrian Askarieh (Hitman) and Brooklyn Weaver (Out of the Furnace), also joined in that capacity by John Hyde and Terissa Kelton. Studio 8 will be represented by the overseeing duo of John Graham and Guy Danella.