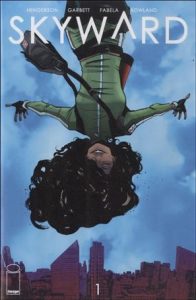 Variety is reporting that Sony has gained the rights to a new comic book property, Skyward and has already tapped filmmaker Brad Peyton to direct. Creator Joe Henderson, also the current Lucifer showrunner, will both write the adaptation and executive produce the film.

Skyward, created by Henderson and Lee Garbett, is set in a world where the Earth has lost a fraction of it’s gravity. Fast forward 20 years into the future, our society has accustomed their lifestyles around the gravity situation. Among these people is Willa Fowler who was born after “G-Day”, who has uncovered a plot to restore gravity to it’s normal state. The first issue was published back in April from Image Comics.

Brad Peyton is known for his large disaster films like San Andreas and the recent Rampage, both of which Peyton collaborated with Dwayne Johnson.

“Jeff and I are focused on making event films regardless of budget or scope. Skyward is a big one. We’re very excited to deliver on what an anti-gravity movie should deliver on and be working with Joe Henderson on this.” Peyton says.

Henderson is gearing up to bring the fourth season of the popular Lucifer to Netflix. Henderson has also worked on shows like 11/22/63, the time traveling Stephen King limited series on Hulu, and USA‘s con artist TV series White Collar. Henderson also took his excitement of Garbett and his creation is heading to the big screen stating on Twitter, “So… the news it out! #Skyward’s been optioned by Sony as a movie!! THRILLED to be working with Brad on this!!”