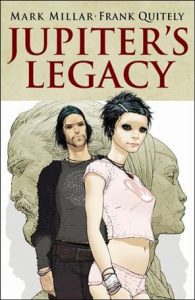 First up is Jupiter’s Legacy, a 2013 comic series about superheroes that received their abilities in the 1930s. “In present day they are the revered elder guard, but their superpowered children struggle to live up to the legendary feats of their parents,” reads the show’s official description. Former Daredevil showrunner and Pacific Rim Uprising director Steven S. DeKnight will serve as showrunner and executive producer. DeKnight, who recently signed a major deal with Netflix as well, is set to direct the first episode. His fellow executive producers are Lorenzo di Bonaventura and Dan McDermott.

Next on the docket is the multilingual American Jesus, which centers on a young boy who discovers that he is the reincarnation of Jesus Christ. Using both English and Spanish dialogue, the series will be overseen by both Everardo Gout (Marvel’s Luke Cage, Sacred Lies, Mars, Banshee, Aqui En La Tierra) and Leopoldo Gout (Molly’s Game, Instinct).

The first film project is Empress, a drama set in space, which focuses on Queen Emporia, the wife of the brutal galactic dictator King Morax. Emporia escapes with her children, but eluding her husband isn’t so easy. No director has been chosen yet, but Lindsey Beer (Kingkiller Chronicle and the upcoming Sierra Burgess is a Loser for Netflix and Wizards of Once for DreamWorks Animation) will write the script while Joe Roth and Jeff Kirschenbaum (The Voyage of Doctor Dolittle, Maleficent) produce.

The second movie coming from the pages of Millarwold is Huck. Set in a quiet town near the sea, the story’s main protagonist is Huck, a dude who uses his special abilities to do good deeds each day. His neighbors are all too happy to keep his powers a secret, but the bubble is burst when a newcomer to the town alerts the media, setting our hero on a life-changing adventure. Again, no director has been chosen, but Ted Melfi (Hidden Figures, St. Vincent) is adapting the comic book into a feature film, with Neal H. Moritz and Toby Jaffe set to produce.

And finally, we’ve got Sharkey The Bounty Hunter, the tale of an intergalactic bounty hunter with a 10-year-old partner, who operates out of an old ice cream truck, which is now rocket-powered. Michael Bacall (Scott Pilgrim vs. the World, 21 Jump Street) is handling the script for this one.