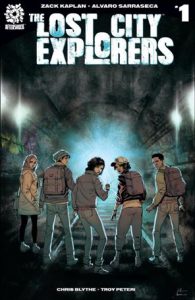 Less than a month after its debut, and Zack Kaplan and Alvaro Sarraseca’s The Lost City Explorers already has been optioned for television.

The AfterShock comics series has been officially picked up by Universal Television to produce the title. Kaplan is attached to the adaptation of the series as executive producer and writer while AfterShock President Lee Kramer and CEO Jon Kramer will also executive produce.

“The Lost City Explorers is a story to inspire the imagination and unlock everyone’s hidden explorer,” explained Kaplan. “Along with Aftershock, I’m thrilled to partner with Universal and help bring this story to television.”

Debuting last month, the coming-of-age series follows a group of teenagers that venture into the tunnels underneath New York City to locate one their missing fathers. As their search continues further and further underground, the group discovers the lost city of Atlantis directly below NYC…but they’re not alone.