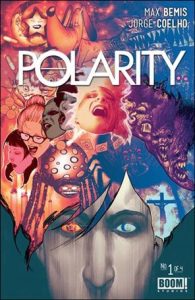 “Polarity,” the BOOM! Studios comic written by Say Anything frontman Max Bemis and illustrated by Jorge Coelho, is being developed for television.

The news arrived just ahead of New York Comic Con from TheWrap, which reports Fox 21 has acquired the rights the 2013 miniseries, which follows bipolar artist Timothy Woods, who discovers in the aftermath of a near-fatal car accident that his medication hadn’t only been subduing is depression and mania but also suppressing his superpowers. He goes from managing the struggle between his mental health of the perception of those around him to wondering whether his newfound abilities are a manifestation of his own creation.

The story is inspired Bemis’ own struggles with bipolar disorder.

The pilot episode will be co-written by collaborators Max Winkler and Matt Spicer, who were hired by Disney in July to pen the planned reboot of “The Rocketeer.” Winkler will also direct the pilot, with Ross Richie and Stephen Christy executive producing for BOOM!

Winkler previously directed episodes of “Brooklyn Nine-Nine” and “New Girl,” as well as the 2010 film “Ceremony.” Spicer is credited with writing the 2012 short film “It’s Not You It’s Me” and the screenplay for the upcoming “Ingrid Goes West.”