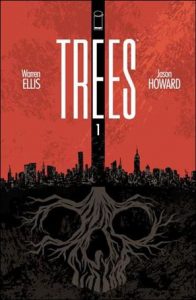 Trees is set 10 years after the arrival of vast alien presences who stand on the earth’s surface like… trees. They do not move or communicate and appear not to acknowledge human life and society. The series follows the silent pressure and strange changes they exert on global communities from China to the Arctic Circle. Like the comics, the drama will combine sci-fi, crime and relationships.