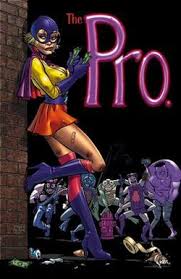 Paramount Pictures has picked up the film rights to Garth Ennis, Amanda Conner and Jimmy Palmiotti’s 2002 graphic novel “The Pro”.

The story involves a prostitute who wakes up one day with superhero powers and is asked to join the League of Honor to help curb her anti-heroic behavior.

The film puts a humorous twist on the superhero genre. Zoe McCarthy (“Bitches On A Boat”) has been hired to write the screenplay while Erwin Stoff is producing.