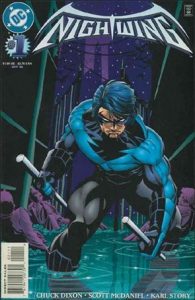 The announcement comes shortly after revealing War of the Planet of the Apes director Matt Reeves will be helming The Batman. McKay is in negotiations to direct the standalone Nightwing film with Bill Dubuque writing the script. Dubuque is best known for his work on Ben Affleck’s The Accountant script.

Aside from The LEGO Batman Movie, McKay is recognized for his work on Robot Chicken and Titan Maximum.

Nightwing, whose real name is Dick Grayson, is known best for being the original Robin in DC Comics. Created by Bob Kane and Bill Finger with illustrator Jerry Robinson, Grayson first appeared in Detective Comics #38 in April of 1940. after his parents were murdered, giving him something in common with Bruce Wayne, he was taken as the legal ward of Bruce Wayne/Batman. He went on to don the title of Robin and fought alongside Batman in many instances across Gotham City.

In some stories, Dick Grayson goes on to play the role of the Dark Knight himself, such as the popular 90’s story Batman R.I.P. written by Grant Morrison.

If The LEGO Batman Movie is any indication, McKay already has a good grip on the Grayson character. The dynamic between Batman and Robin in the animated film added an extra humorous dynamic but also supplied ample heart to the runtime.