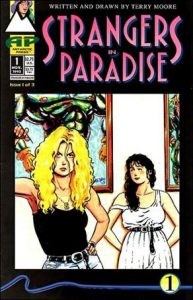 Terry Moore’s Strangers in Paradise has been optioned for a big-screen adaptation, with filmmaker Angela Robinson at the helm.

The long-running comic, which will return for a short engagement in 2018 to celebrate its 25th anniversary, centers on three characters: Katchoo, Francine, and David. The three are living a quiet life in Texas when dark forces from Katchoo’s past track her down, hoping to take everything from her, including Francine and David.

“Angela and I have known each other for years and I greatly admire her creative vision.” Moore told Deadline. “From day one our common goal was to bring Strangers In Paradise to the screen. It’s a complex story that took years to write and Angela gets it on every level. I can’t wait to get started.”

In the twenty-five years that he has been working in mainstream comics, Moore has earned a reputation for writing and drawing women well; when asked, he tends to deflect, saying that he simply writes them like people, and chooses to make his characters female because that is what he prefers to draw.

“I’ve been wanting to adapt Strangers In Paradise for over a decade, since the first time I read it and couldn’t put it down. Terry Moore writes real female characters with such breathtaking sensitivity,” Robinson said. “With Strangers In Paradise he pulls off the nearly impossible — a sexy, stylish crime story with tons of heart. I look forward to our collaboration.”