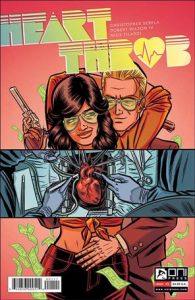 Oni Press has announced that Heartthrob by Christopher Sebela, Robert Wilson IV, and Nick Filardi has been optioned by Studio 8 for a potential television series.

Heartthrob is the critically acclaimed comic book that mixes romance and heists in a story about second chances, Fleetwood Mac’s “Rumours” album, and a bank robbery spree fueled by love and revenge. The series, which launched in 2016 and is now in its second season, follows Callie, whom after gaining a new lease on life thanks to a heart transplant procedure, meets and falls in love with a mysterious master thief who also happens to be her heart donor.

Katherine Pope, Studio 8’s Head of Television said, “Heartthrob is an incredibly special and original piece of material, and we at Studio 8 couldn’t be more excited to be in business with Riley, Gina, and the crack team at Oni Press.”

Writer and co-creator Christopher Sebela said,”Robert, Nick and I have been building the world of Heartthrob as a passion project for the last few years, so we’re pretty geeked to be working with everyone to bring it to an entirely new audience.”

While properties from DC, Dark Horse and Marvel tend to make the headlines, it is good to see smaller publishers get noticed from producers and media outlets.