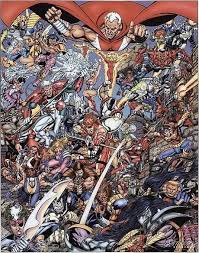 About a year ago, a little R-rated comic book movie by the name of Deadpool surprised audiences and critics everywhere with one of the year’s biggest box office performances. You’d be hard-pressed to find anyone more pleased with the film’s success–and that of its title character–than co-creator Rob Liefeld. The self-taught artist, writer, and creator of numerous other popular comic book characters has another reason to be happy today: The Deadpool effect has led to a solid shared cinematic universe deal that will encompass 9 comic book titles and more than 100 characters.

Graham King and Fundamental Films are partnering to secure the film rights to Liefeld’s Extreme Universe, which includes characters like Bloodstrike, Brigade, Lethal, Re‐Gex, Cybrid, Bloodwulf, Battlestone, Kaboom, and Nitro‐Gen. King will partner with Akiva Goldsman to develop the property with an eye to launch a film franchise. The pair plans to set up a writer’s room for the banner, which Goldsman will oversee, similar to his work leading the writer’s room for Hasbro and Paramount. King and Goldsman will produce the titles alongside Liefeld and Brooklyn Weaver with Weed Road’s President of Production Greg Lessans and GK Films’ Denis O’Sullivan acting as executive producers.

Here’s what Liefeld had to say about the deal:

“Over the past nearly 25 years, since launching Image Comics, I’ve been lucky enough to see the power of these stories and characters as they’ve resonated with several generations of comic book fans. To now be able to work with Akiva Goldsman and Graham King, who are powerhouses in their own right, to bring these compelling characters and conflicts to life on the big screen is nothing short of a dream come true!”