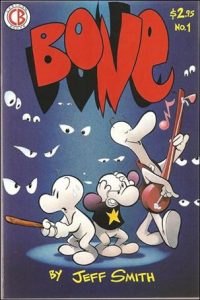 The Bone movie will be co-scripted by Osborne and Adam Kline (Artemis Fowl). Warner Bros. obtained the rights to Bone in 2008.

Bone is one of the great self-publishing success stories of the comic book industry. The story follows the three Bone cousins – Fone Bone, Phoney Bone, and Smiley Bone – after they are run out of their hometown of Boneville. They end up crossing ad dessert and finding their way to a forest, where they encounter a young girl named Thorn. This encounter ends up dragging the Bones into epic fantasy adventure that involves everything from a cow race to a royal love triangle.

“Bone is very special and unconventional because it blends elements together that you don’t necessarily expect — soft, little comic characters and epic high stakes fantasy adventure,” Osborne tells The Hollywood Reporter. “To carry this into the cinematic realm presents both an opportunity to represent what readers of all ages have loved about the series while pushing animated storytelling into exciting and different areas.”

“As source material goes, Jeffs epic is something of a unicorn; mythic, whimsical, and pure in equal measure,” said Kline.