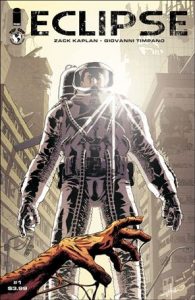 Comic book writer Zack Kaplan is having himself quite the month. Earlier this month his book at AfterShock Comics, The Lost City of Explores, was picked up by Universal Television to develop a television series. Today Deadline is reporting that another one of his comic book titles will also be developed for television.

Robert Kirkman’s Skybound Entertainment has optioned Kaplan’s first comic book he worked on titled Eclipse over at Top Cow. The first arc of the book illustrated by Giovanni Timpano with artwork by Chris Northrop is available now in trade form. If you’ve kept up with the title like we’ve recommended on The Comic Source Podcast, then you’d know that the third arc will start this week with Eclipse #9, which will be in comic book stores everywhere this Wednesday.

Eclipse takes place in a future where a solar event has turned the sun into humanities worst enemy. Anyone hit with direct sunlight is burned alive. The wold that managed to survive the catastrophic event now live in nocturnal cities. The book follows a character named David Baxter who is part of a team who monitors the surface world using a special suit. A murderer emerges who uses the sun to do his dirty work and when the daughter of an important solar power mogul is targeted, it’s left to Baxter to protect her, leading him on a journey that he could have never imagined.

Top Cow’s Marc Silvestri and Matt Hawkins will executive produce along with Skybound Entertainment. Kaplan will also be a co-exectutive producer on the project. Top Cow is repped by Circle of Confusion and Harris Miller. Kaplan is repped by Heroes and Villains Entertainment and Jackoway Tyerman.