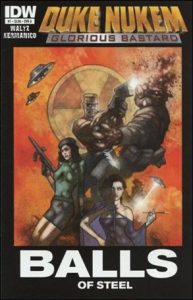 Gearbox Software has provided an update on the Borderlands movie while also revealing plans to make a Duke Nukem adaptation. Comic book movies are currently enjoying a renaissance, and next up might be video game movies. It’s no secret that Hollywood has struggled to adapt video games onto the silver screen; the most successful adaptation thus far has been the Resident Evil series, and even that is undergoing a reboot.

In addition to the Resident Evil reboot, various studios are working on adaptations for games such as Rampage, Uncharted, Tomb Raider, Splinter Cell, and Call of Duty, among several others. Now, Gearbox Software wants to get in on the trend. Two years ago, they announced plans to adapt Borderlands into a feature film in partnership with Lionsgate. The movie studio has since hired G.I. Joe 3 scribe Aaron Berg to write the script for the film that will be rated R.

It has been over a year since we last heard about the Borderlands film. During an interview with Geoff Keighley on YouTube Live at E3, Gearbox Software CEO Randy Pitchford provided an update on the adaptation.