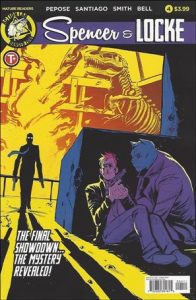 Debuting this past April from Action Lab Entertainment, David Pepose and Jorge Santiago Jr.’s Spencer & Locke made immediate waves in the comic book industry. So much, in fact, that Hitman producer Adrian Askarieh has already optioned the movie rights to the series.

“I was hooked from the very first issue,” Askarieh told The Hollywood Reporter. “There is something darkly visceral and uniquely cinematic about what David and Jorge have created.”

Spencer & Locke follows a hard-boiled detective named Locke as he solves a brutal murder with the only partner he can trust — his imaginary talking panther, Spencer. However, when their investigation stirs up a vicious crime syndicate and memories of Locke’s traumatic past, the pair must survive long enough to uncover the mystery and bring the culprits to justice.

“I’ve always been a big fan of mash-ups and remixes,” Pepose told CBR back in January, “and Spencer & Locke is very much in that vein – our initial high concept was pitched as ‘what if ‘Calvin and Hobbes’ grew up in ‘Sin City’?’ So while we’re very much a dark parody of both Bill Watterson and Frank Miller, I think there is that sense of reader expectation – which we’re able to play upon or subvert to better build up our story. Given this is very much an homage to one of the most iconic comic strips of all time, there’s a lot of tropes and iconography we’re able to play around with, and I’m just excited for readers to see how we’ve turned a childhood classic on its ear.”

While no further details about the film are available at this time, Askarieh does intend to submit the project to Constantin Film, the company behind the Resident Evil franchise, under the producer’s brand new two-year first look deal.