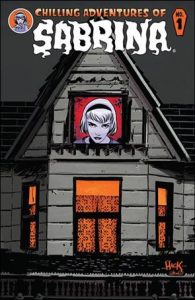 Sabrina is on the move. The Chilling Adventures of Sabrina series, originally put in development at the CW in September as a potential companion to Riverdale, has landed a 20-episode, two-season, straight-to-series order at Netflix.

The now-untitled project, based on the Archie Comics graphic novel The Chilling Adventures of Sabrina, comes from the same team as Riverdale: Roberto Aguirre-Sacasa, Berlanti Productions and Warner Bros. TV. Aguirre-Sacasa, who penned the Riverdale pilot, and Lee Toland Krieger, who directed it, are reprising their roles on the Sabrina pilot episode.

While most other popular Archie Comics characters are in Riverdale, Sabrina the Teenage Witch had been conspicuously missing from the CW’s Archie-themed drama series, so it made sense when the network announced in September that it was developing a separate series about the young witch.

Word is, likely based on the success of Riverdale on Netflix, the streaming platform gave producing studio Warner Bros. TV a two-season pickup offer it could not refuse. The CW — which also has another female witch drama in the works, a Charmed reboot with Jane the Virgin creator Jennie Snyder Urman — had committed only to development. Additionally, by going with Netflix, WBTV is retaining full ownership of the Sabrina series. (Riverdale is a co-production with CBS TV Studios per the CW business model, and so would’ve been The Chilling Adventures of Sabrina had it stayed at the broadcast network.)

The series’ move is somewhat reminiscent to The Unbreakable Kimmy Schmidt, originally picked up by NBC for a midseason run before Netflix stepped in with a two-season order. Netflix’s interest in Sabrina is not surprising. Riverdale has been a success story for both the CW and the streaming service, which has domestic SVOD rights to the dark, soapy drama and carries it internationally in many territories. Young viewers discovering and catching up on the first season over the summer by bingeing on Netflix is credited at least in part with Riverdale‘s strong ratings sophomore season performance on the CW this fall.

Still, the relocation of the potential companion series will not allow the CW to build an Archie universe the way it has with the DC series, where characters frequently cross over. (The network has another offshoot in the works, the Supernatural spinoff Wayward Sisters, which will be introduced as a planted spinoff episode of the mothership series later this season.)

A dark drama in the horror genre, the new Sabrina series is worlds away from the bubbly 1996-2003 Sabrina, the Teenage Witch comedy series starring Melissa Joan Hart. The new project reimagines the origin and adventures of Sabrina the Teenage Witch as a dark coming-of-age story that traffics in horror, the occult and, of course, witchcraft. Tonally in the vein of Rosemary’s Baby and The Exorcist, this adaptation finds Sabrina wrestling to reconcile her dual nature — half-witch, half-mortal — while standing against the evil forces that threaten her, her family and the daylight world humans inhabit.