Once Our Land Comic Book Optioned 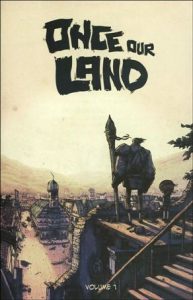 Scout Comics & Entertainment is excited to announce that Peter Ricq’s ONCE OUR LAND has been optioned by Amber Ripley of Goodbye Productions (ENTANGLEMENT) to develop as an animated feature film. Ricq will adapt with Phil Ivanusic-Vallee.

Set in 1830s Germany, Once Our Land is a post-apocalyptic tale of two survivors, Ingrid and Fritz, as they battle each day against mysterious, monstrous invaders that have surfaced and wiped out everything they once knew.

Brendan Deneen, CEO of Scout Comics, said, “ONCE OUR LAND was one of the very first books that we published, and in just two issues, Peter was able to create an entire world and mythos. It’s an impressive piece of sophisticated yet whimsical storytelling. I can’t wait to see it translated for the big screen.”

Peter Ricq, writer and artist of OOL, said, “I’ve worked with Amber before on our feature ‘Dead Shack’ and since then, I’ve been looking forward to working with her again. ONCE OUR LAND is a story I’ve developed and thought about for a decade and so the film is very fleshed out in my head. The script expands on the worlds and characters and I even got the chance to show the alien world, which I had wanted to add to the original book. It’s all very very exciting.”

The second volume of ONCE OUR LAND is slated to hit comic book stores in 2019 from Scout Comics.