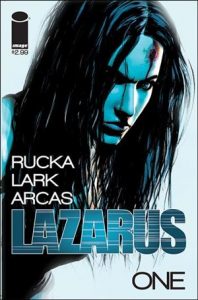 Amazon has set up three high-profile drama series for development: Ringworld, based on Larry Niven’s classic science fiction book; Lazarus, based on the comic book by Greg Rucka (Jessica Jones); and Snow Crash, based on Neal Stephenson’s cult novel.

The streaming platform has been ramping up its slate with new projects as part of a programming strategy overhaul in search of big, buzzy shows. A major emphasis has been put on fast-tracking big-scope genre drama series in the mold of Game of Thrones and The Walking Dead, with Sharon Tal, brought in earlier this year as Head Of Event Series, tasked with spearheading efforts. The deals for Ringworld, Lazarus and Snow Crash are part of that push.

Ringworld, a co-production with MGM, is based on Niven’s science fiction book series from the 1970s and tells the story of Louis Gridley Wu, a bored man celebrating his 200th birthday in a technologically advanced, future Earth. Upon being offered one of the open positions on a voyage, he joins a young woman and two aliens to explore Ringworld, the remote artificial ring beyond “Known Space.” The books cover their thrilling journey as they attempt to fulfill their original mission to uncover the mysteries of Ring.

Syfy previously developed the books as a four-hour miniseries with William S. Todman Jr. and Edward Milstein as exec producers. A bit of trivia — Ringworld was part of the same 2013 Syfy longform development slate as an adaptation Philip K. Dick’s The Man In The High Castle, which also didn’t go forward at Syfy but went on to become Amazon’s flagship drama series.

Written by Rucka based on his comic book, Lazarus is set in an alternative near future where the world has been divided among 16 rival families, who run their territories in a feudal system. Each family has allies and enemies among the other families. To crush uprisings and fight wars, most families have a Lazarus: a one-person kill squad.