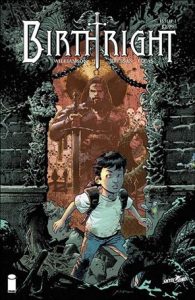 The comic book fantasy series Birthright, produced by Image Comics, is being adapted for the big screen. Cinco Paul and Ken Daurio, the writers of the Despicable Me movies, are set to join forces with Robert Kirkman (creator of The Walking Dead) and Kirkman’s own Skybound Entertainment to adapt the epic.

According to The Hollywood Reporter, the film will be housed at Universal, due to Skybound’s “first-look deal with the studio.” Kirkman is set to produce, alongside David Apert, Bryan Furst, and Sean Furst. Jeb Brody (The Mummy) will also be on the team.

Written by Joshua Williamson with art by Andrei Bressan, Birthright tells the story of the Rhodes family and what happens when their young son vanishes. A grown man approaches them a year later and claims to be their son, spinning them a tale having been on another world. The Rhodes family ultimately joins together with this man on a mythical quest to figure out exactly what happened.

This is the third film project to find itself at Universal because of their deal with Skybound—Invincible (another Kirkman creation) is being adapted there too, as is the comic Kill the Minotaur. It will be interesting to see if there are any other favorites from Image Comics that Universal has its sights set on—the once small publisher has become mighty of late, with The Walking Dead and Kelly Sue DeConnick’s Bitch Planet making it an essential brand.

As far as Birthright goes, right now there’s no word on whether they are aiming to make several films, or just one. The writing team of Paul and Daurio are known for family-based fare (The Secret Life of Pets, in addition to the Despicable series) so we don’t really know what to expect from them, either. The comic isn’t always family friendly, and these are the guys that brought the Minions into our lives, after all.