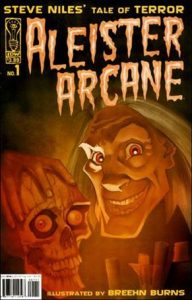 “Aleister Aracane,” written by Steven Niles, was first published in 2004 by IDW Comics. Jon Croker will adapt for the screen.

Mandeville Films’ David Hoberman and Todd Lieberman will produce along with Michael Aguilar.

The story centers on a group of children who befriend a bitter old man ruined and shunned by their parents. After his death, only they have the power to thwart the curse he has laid upon their town.

Variety reported in 2004 that Paramount had picked up the rights and set up the project with Aguilar and Dean Georgaris. The rights eventually lapsed.

The comic book story focused on a local TV horror host Aleister Arcane, who’s forced off the air due to the wishes of parents in an Oklahoma community. In the wake of Arcane’s unplanned retirement, unexplained terror and horror beset the town.